In September 2021, Norsepower CEO, Tuomas Riski travelled to the Port of Rotterdam to take a trip onboard Sea-Cargo AS’s SC Connector. Since the retrofit installation of our Rotor Sails, the SC Connector is now Norway’s largest sailing vessel. The sails are 35 metres tall and 5 metres wide cylinders. The vessel’s total air draft is 56 metres.

However, its immense size is not what makes it special, this project made history when we installed the first tiltable Rotor Sails that were designed for extreme conditions in the North Sea. The design allows the vessel to travel under bridges and overhead power lines as well as navigate into port with ease.

Tuomas Riski arrived on Tuesday at the Port of Rotterdam, ready to set sail. Before leaving Rotterdam, the tilting of the Rotor Sails was tested together with Captain Artur Sylwestrzak and Johan-Christian Hvide from Sea-Cargo. 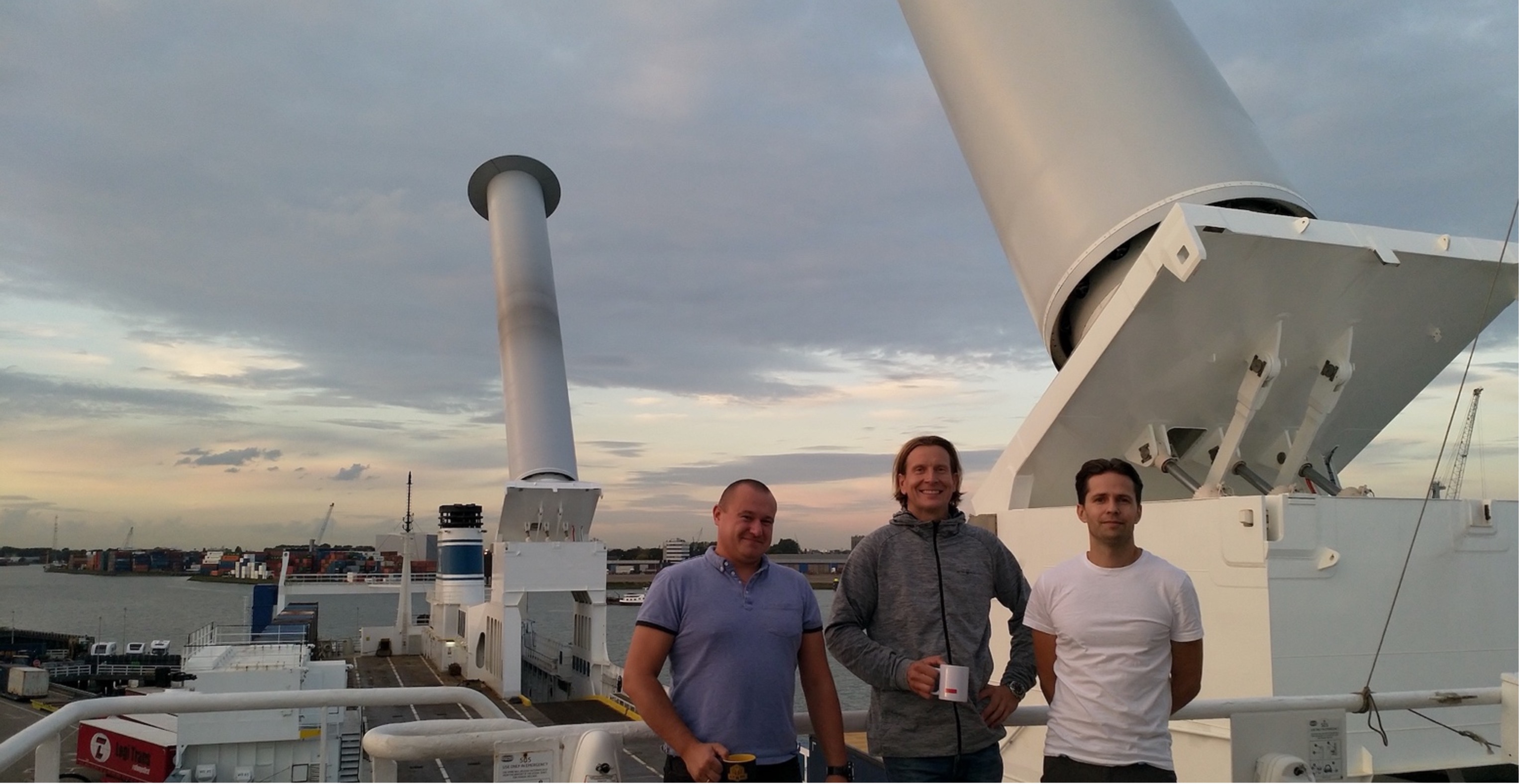 It was amazing to see how smoothly both of the Rotor Sails could be lowered down to allow the ship to pass under bridges and power cables in action. The entire process of tilting the Rotor Sails to almost horizontal and re-elevating them took less than 30 minutes in total. The ship then departed towards Norway late on Tuesday evening and after leaving port the Rotor Sails were started.

Captain Artur Sylwestrzak told Tuomas on the bridge that, “Yesterday, when the wind was around 15 m/s, and the Rotor Sail control panel was showing around 4 MW of main engine equivalent thrust from the Rotor Sail, I decided to test what happens if I turn the Rotor Sails off for a short time. When doing this, I noticed that the speed of the ship dropped from 18kn to around 15kn, and at the same time, the increased main engine load caused fuel consumption to increase with around 250 litres per hour. I have absolutely no doubt that this technology is working.”

And with that commendation from the captain, they started their first day of sailing. The wind conditions were quite weak; however the Rotor Sail control system was still able to produce around 800kW of main engine equivalent thrust from the Rotor Sails. At that time, another watch officer on board told Tuomas that, "I have been using this technology for several months now. If I would stop the Rotor Sails now, we would certainly see a speed decrease of 0.4kn and the roll of the ship would be increased. In my opinion, this has been one of the best investments ever for this ship."

In addition to Rotor Sails, the ship has been fitted with a battery container, which balances peaks of electricity demand when accelerating the Rotor Sails. During the voyage, Tuomas also had a guided tour of the battery container and engine room – proudly presented by Chief Engineer Mariusz Sulek.

It was fantastic to see how the crew of the SC Connector have learned to take the wind forecast into account when planning voyages over the North Sea. During the voyage, the captain decided at one point to steer the ship 10 degrees more towards the East just to get a better Rotor Sail thrust and ship speed. This then enabled them to voyage with a smaller total energy consumption. Efficiency and sustainability in action. The trip also confirmed Tuomas' earlier understanding of the favourable performance benefits of the Rotor Sails: when the wind speed and swell increased and the wind shifted more towards the ship’s bow, the lateral forces caused by the Rotor Sails increased at the same time, causing the ship to experience a slightly bigger constant heel but decreased rolling.

Tuomas and the crew arrived in Tananger, Norway early on Thursday morning. During this single voyage from Rotterdam to Tananger, Rotor Sails saved 4.6 tons of fuel, and CO2 emissions were reduced by 14 tons, which is more than the annual carbon footprint of an average Finn.

Based on this voyage, we can see that the crew of SC Connector are really bringing sailing back to shipping - together with Norsepower.